The Lost Recipes of the Mob 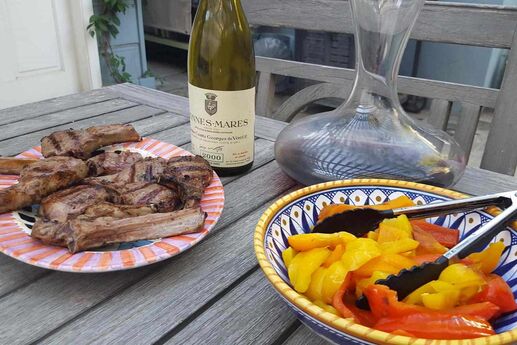 First, a few disclaimers: Names, dates and locations have absolutely been changed for the safety of the real people involved in this story. It is absolutely true.

My wife and I were married in north San Diego County in the Spring of 2007. It was before the housing crisis hit, and it was before we had children, so we were happy, and still pretty young. I had a job at an internet company specializing in audience and data segmentation, and as near as I could tell at the time, it was mostly fraudulent. But they had a sweet ping pong table and an above average free snack deal, so life was good. They also paid me pretty well. My wife taught 2nd grade a fancy private school for wealthy families, so her life was also good. We lived in a rented, one story house in the nicer part of Del mar, a swank beach community. Our house up on a hill a few miles from the beach, but we spend the weekend biking, walking our dog, enjoying the beach and boozing with our friends. We were pretty normal 30 somethings.

About 2 months after we were married and moved into our house, we noticed a neighbor of ours. He was in his early 60s and began waving to us as we came and left, and was general smiling and friendly. One Sunday afternoon we bumped into him at the supermarket and we introduced ourselves. His name was Carmine. Carmine was a cool looking guy. He had slicked back dark hair, a nice suntan and a some quality threads. He also was wearing, the day we met him, the sweetest white loafers you’ll ever see. At any rate, he was stocking up on some pretty fancy ingredients, and my wife asked him if he was cooking for someone. He said only for himself and his dog, and then promptly invited us over for dinner the following Sunday. We accepted.

As the following Sunday approached, we considered cancelling (it was along hot day at he beach) but showed up at his house at 6:30 with a bottle of $25 Chianti. Carmine answered the door, and we were hit with an array of sensations: Auditory (Frank Sinatra), visual (a gold necklace, and open collared shirt, graying chest hair) and olfactory (exquisite aromas of pasta dishes, mixed in with cheap cologne). Carmine, whatever and whomever he was, was authentic if nothing else.

That night he made us a fantastic meal of antipasti, pasta, salad and more pasta. We drank our wine and bunch more of his. One of which was an expensive Barolo. We rolled out of there and fell into a deep coma, barely able to wake for the Monday morning bell. About 2 weeks later we did it again, and thus began a weekly tradition that lasted about a year, with a few missed Sundays. We would watch football during the Fall, and gorge ourselves on incredible food. As we drank and ate and got to know each other, Carmine would start surprising us with new parts about himself. One time he broke out a giant joint that we smoke between courses. He told us that would help us regain our appetite for the next two courses. The meals got finer and more fun and the wine got fancier. Once we had house guests and brought them over. Another time we invite some local friends to enjoy Carnie’s hospitality. He was something else.

All this time, my wife was quizzing him on how he was able to make such amazing meals, and he told us his mother taught him how to cook when he was a young man. This lead to question about his upbringing, and he told us he was from Philadelphia. And, in a stunning disclosure straight out My Blue Heaven, he confessed that he was a former mobster turned government witness, and that he was in ‘The Program’. Carmine was a real life member of the mob, living in secret 4 doors down from us in Del Mar. You can’t make this stuff up.

As our friendship with Carmine evolved, he slowly began divulging certain culinary tricks that made his plate special. The Marsala sauce had a dash of plum sauce, the Pesto had a pinch of walnuts, and the Bolognese has a bit of ground sausage from Italy. Eventually my wife got pregnant, I lost my job, and before we knew it we were off to San Francisco for our next adventure. At our farewell dinner with Carmine, he gave me copies of some of his recipes after we promised not to share with anyone. But later via email after his mother had passed away, he agreed to let me share them with the world. So here you go, in no particular order, the 4 greatest lost recipes of the Mob.

You can eat this over veal or pasta, it really doesn’t matter. The sauce is what is so special.

Heat up olive oil in a sauce pan, add in garlic, onion, mushrooms stalks. Sauté mushrooms for 2 minutes on low heat, add in flour, and then a minute later add in wine and stock. Cook until the sauce thickens. Add salt and pepper to taste

Combine basil, garlic, pine but and walnuts in a food processor and chop. Add in ½ cup of the oil and blend until smooth. Add salt & pepper to taste. Stir in remaining olive oil and cheese right before consumptions

Heat olive oil in a large skillet. Stir in garlic and onion, sauté until soft. Add in celery and carrots and cook for about 5 minutes. Raise heat and stir in ground beef and sausage, cook for about 6 minutes. Add tomatoes, parsley and basil leaves. Lower heat and cook for 20 minutes. Stir in Pecorino cheese.